Is the Universe a simulation?: If you thought the concept of ET life would challenge religion, consider this
27 April 2018
Talking to a radio astronomy guy who believes in God and some thoughts on evolution
17 August 2018
August 17, 2018 by Maureen Arges Nadin in RECENT NEWS

” Faith and science are not competitors. They are two different languages trying to tell the same story.  There is room in the world for both. ”

A quick thought before I start the new post: I had to share this quote from Dan Brown’s novel, “Origin“.  A friend was recently reading it and thought that it was “right up my alley”–all that “faith and science stuff”.  🙂  So I scored a copy of the book from another friend and delved right into it.  The above quote is spoken by the main character, Robert Langdon, ( of the Da Vinci Code fame ) to a brilliant Elon Musk type scientist who is preparing to release a  discovery that will  not only disrupt but shatter the foundations of most of the world’s religions!! No spoiler alert required –I’m only on Chapter 2:)  Will keep you posted.

*link to the video is at the top of this post

This video is available on YouTube but I found it on a post from Father James Kuryzinski on the Vatican Observatory Blog. Just for context, Father James is one of my inspirations and one of the architects of the Faith and Science Workshop that  I attended in January 2017.  It was great to meet him and share in his enthusiasm  for this subject.  I hope to chat with him further about his work in this area but that is for another post.

This video takes about 13 minutes to view and I hope that you can spare that amount of time as I need some feedback as to whether I over reacted to or misunderstood  something that was said during the discussion. But first — a little bit about the video.  Both Fr. Juan Pablo and Dr. Rothschild are excellent communicators who have an obvious passion for the subject of the potential for life elsewhere in the Universe.  I enjoyed the video immensely and as always, found myself  wishing I was in the audience or better yet–part of the discussion! lol 🙂 Dr. Rothschild is an expert in her field and also a well known documentarian on this and related subjects. She tells us that she just completed filming a special called “Life in the Universe” ( must look that up ).  Dr. Rothschild  brings a great energy to the interview and injects humour and excitement into the discussion.

Father Juan Pablo is basically conducting the interview and asking the questions but tells us, by way of introduction, that he is a specialist in “faith and science dialogue” and finds that by studying astronomy and nature in general, he comes to a better understanding of God.  Both he and Dr. Rothschild are fascinated by the potential for  ET life and although they come at from different perspectives, ( “faith and science are 2 different languages trying to tell the same story”), both seem to feel that it is highly unlikely that we are alone.

Dr. Rothschild outlines basic approach of astrobiology and the facts that  are by now becoming familiar to anyone who follows this subject.  Astrobiologists, space and planetary scientists now know that the building blocks of life exist on many planets ( and the number of known planets in just our own Galaxy seems be growing exponentially daily ) other than our own and as Dr. Rothschild points out  -” Lloyds of London is no longer taking bets on whether there is life on Mars or whether we are alone in the Universe. “..Although, as she points out, we haven’t found definitive proof as of yet, it seems to be widely accepted that is highly unlikely that we are alone in the Universe.  The discussion centered more on speculating, from a purely scientific perspective, what  that other “life” may be like.  We know that the conditions that led to the rise of life on earth exist on many other planets.   Astrobiologists wonder if we , as in human beings, are typical of “life” or we one of many varieties? There is obviously no answer to this question at the moment but it is tantalizing indeed to speculate or dare I say–imagine?   This is , after all, what science fiction writers have been doing for decades and have given us everything from the logic driven Vulcans of Star Trek ( who are , truthfully, still very human like ) to the reptilian invaders of countless apocalyptic science fiction/horror movies.

It is at this point during the discussion (  at approximately the  6:40 point ) that Dr. Rothschild says something that I found somewhat disturbing.   However, in fairness, she may have said this as a  strictly as a tongue in cheek comment or perhaps even a metaphor. I sure hope so.  When Father Juan Pablo asks  if , when scanning the Universe, is she looking for possible conditions for life or the possible consequences of life being there–she replies that she is indeed looking for both.  And she expands on that by saying ” What I would love , as a biologist, is to catch one alive. Now I sound like a hunter ( laughs).  If we had something that we could poke and prod and study, that would be fabulous! ”

Really? Perhaps it would be fabulous for you but it may be less so for the hapless life form–whatever it may be or appear to be. Because Dr. Rothschild comes across as being so positive and likeable, I am giving her the benefit of the doubt on this one. Perhaps she is using these images as metaphors but in doing so, she has raised an issue that periodically comes up in discussion about “first contact”–any kind of first contact. And that is ethics.  I think that by now, it should be a given that not all “life” is going to look like us.  Look at the diversity of life forms on our own planet –many of which we now know survive in extreme environments in various corners of the planet. And yet they are “alive.”

Shouldn’t all forms of life, regardless of whether they are terrestrial or extraterrestrial be treated with respect?  As a writer, I know the power of words and the importance of communicating clearly and authentically.   I’m sorry but words like “hunting” and “poking and prodding” are loaded in that they evoke very specific images.   And those images are unpleasant or at least they are for most of us with any degree of sensitivity.  And although the history of humanity is full of examples of not only lack of respect but downright oppression and cruelty towards other human beings–isn’t it time that we learned from that and moved beyond it?  We are now venturing to other worlds and if nothing else, we should bring with us not just our  scientific curiosity but our basic human values of respect, dignity and compassion.

I wonder if the ethics of First Contact are outlined in some sort of document or manifesto somewhere or is it just the Wild West out there? And is this the role of the religious and faith community?  I don’t know.  I might have hoped that Father Juan Pablo would have ventured further into the subject during the interview but perhaps that was not the time or place.   Again, I wasn’t there and the human dynamics of an interview situation can be tricky to navigate. I know from my own work where I often interview sources for an article and a subject of interest might inadvertently come up in the discussion that I would like to pursue. But I remind myself that I am there for specific information and I have limited time to obtain it. Perhaps this was the situation here.   And again –  I wasn’t there so maybe  it was something that was discussed off camera or it was clear to Fr. Juan Pablo that it was merely a tongue in cheek comment.  Either way, I do hope that the ethics of First Contact are something that will be discussed in detail as we get closer to that moment.

Thoughts, opinions, musings on this topic are more than welcome 🙂 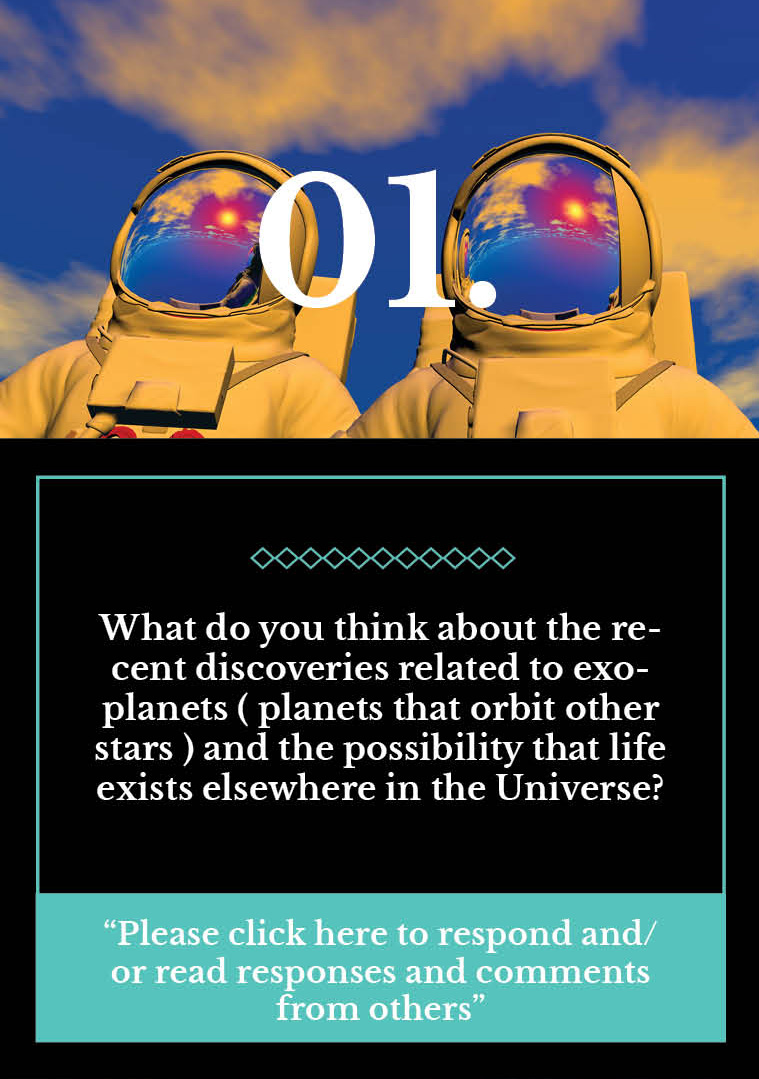 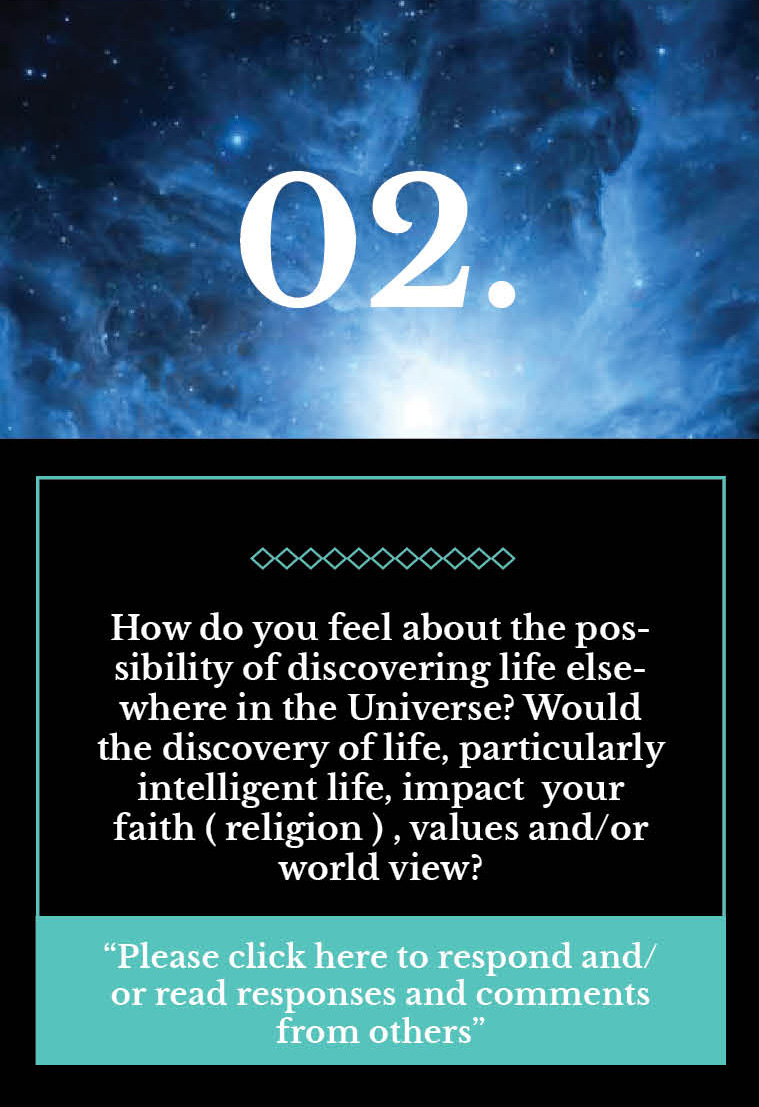 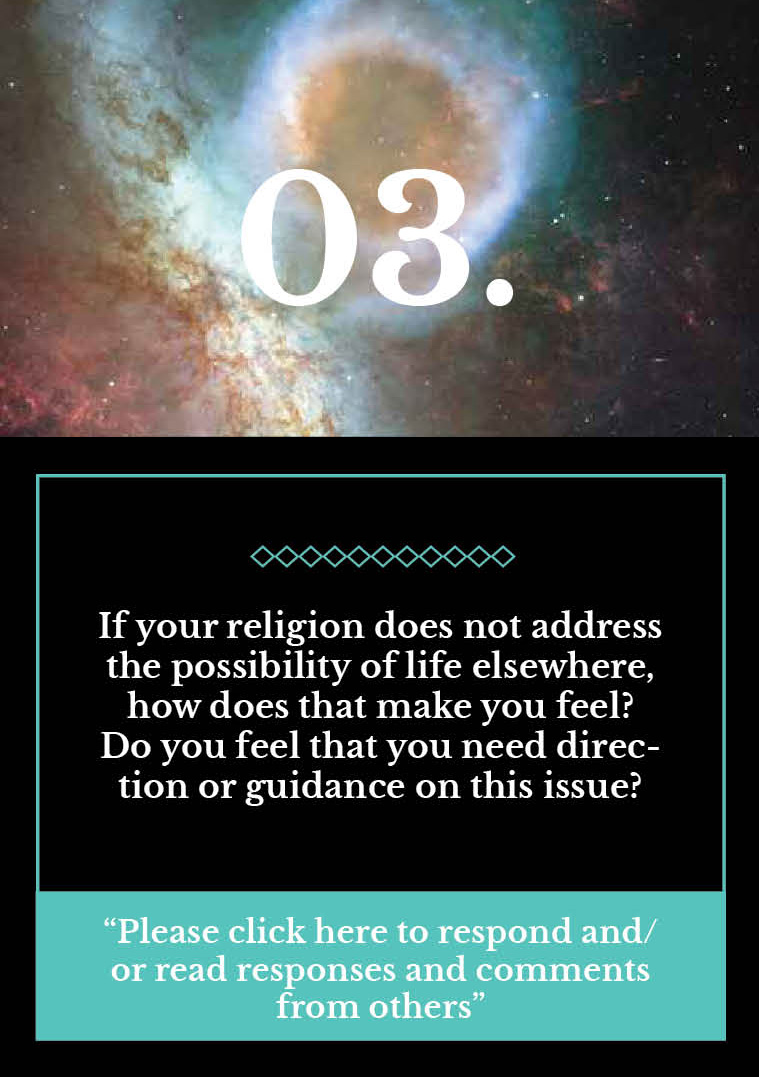 Thank you for interest and participation in this project. M.A.N.

© Maureen Arges Nadin | website by Flow Media
We use cookies to ensure that we give you the best experience on our website. If you continue to use this site we will assume that you are happy with it.Ok